The trouble with boys….

Posted on December 10, 2014 By sharonprosser

Apologies for the radio silence for a wee while. I have been existing in a fog for the past few weeks, having gone slightly deaf as a consequence of having a bad head cold, combined with a rapid descent on my flight from Singapore to Bangkok causing my head to feel like it was exploding, and my ears haven’t yet recovered, nor can I shake off the cold. I haven’t been able to breathe, smell, hear or taste for the past 2 weeks. So I lost my sparkle somewhat, and my propensity to be both witty and articulate escaped me (I am both of those usually, right?). 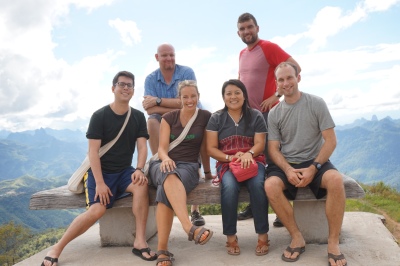 So this is where the boys come in. Whilst wallowing in a pit of congestion, I have journeyed from Bangkok through Northern Thailand and into Laos, ending in Hanoi, Vietnam, a couple of days ago. My Laos family this time was (with the exception of our wonderful guide, Tudtu) entirely male. We were just a small group of 5 and despite one of them commenting “is this it?” when we first met up in Bangkok, we ended the trip agreeing that it was a great way to travel. In such a small group, that is. I am pretty sure they would have all preferred more female, and certainly less snotty, company.

Being boys, they didn’t give two hoots about me feeling crappy. So I just had to man up and get on with it (with 50 tissues to hand – I can assure you that it was even less attractive than it sounds). But for me, and I hate to admit this, traveling with boys was simple. They are uncomplicated. They don’t ask you how you are feeling… but in equal measure they were great company, easy going, funny and (importantly) they carried my case, despite it being a good 10 kilos heavier than any of their baggage. (Am still not sure how that happens but as we decanted 2 (of my 3) toilet bags from my case to Dan’s at the airport to avoid me paying excess, we realised that those alone weighed 4 kilos, so the clue may be in the beauty products. Let’s face it, it takes a lot to stay looking this young/good/or just ‘like this’*.). I even let the boys call me Shazza which as many of you know is not a privilege I bestow on many people. Or perhaps I didn’t have a choice….

loo with a view

view from the loo

As for the trip itself… my new family and I have just spent the most amazing fortnight travelling through the most stunning country ever. Laos rocks. I already want to go back, get on a bike, and take it at my own pace, because every turn heralds a beautiful sight. I frequently found myself silently saying “stop the van” as there were numerous wonderful photo opportunities.

We started out in Bangkok and travelled by overnight sleeper train to Chang Mai in the north of Thailand. Now, I have never done the Edingburgh to London sleeper train but I am guessing it is better than this was, both in terms of sleeping and also I imagine it doesn’t have a loo that blows a breeze ‘up there’ when you use it, given it empties directly onto the tracks. Having said that, it was at least western style toilet which is more than we expected.

Needless to say, I didn’t get much sleep, and I was feeling my worst in Thailand so I can’t even describe the next few days. But we got to the border a few days later and crossed into Laos before spending 2 days sailing down the Mekong River to Luang Prabang so I didn’t have to make much effort for a while.….

travelling down the Mekong River

The photos don’t do it justice but hopefully give you an idea. En route we saw elephants, water buffalo, people sifting for gold, fishing, farming, we went through jungle as well as farmland. It was beautiful. And then we arrived in Luang Prabang, a UNESCO world heritage site. They say Lao PDR stands for ‘people don’t rush’ as well as People’s Democratic Republic… and that sums Luang Prabang (and Laos) up. Sleepy, chilled, beautiful. Don’t expect good service, but do expect amazing vistas, gentle, reserved locals and a great, great experience (did I already say I loved it?). 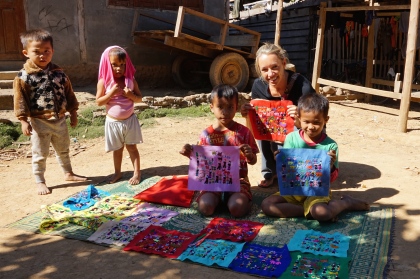 local village along the Mekong 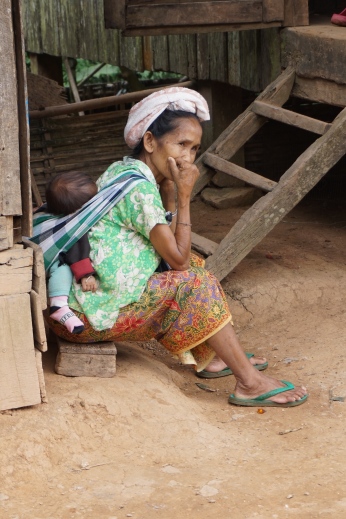 Still in the hill tribe village

Laos is similar in size to the UK, but has a population of 7m. Its main income is from gold mining, followed by hydro power, then tourism. The average earnings are c.USD600 per annum. It is one of (if not the) poorest Asean nations. But if I compare it to Burma, I didn’t get any of the sense of poverty or unease I felt there. People here are happy, streets are clean, food is tasty (or so I am told, personally I haven’t tasted anything for weeks). But then again, Laos doesn’t have cities on the scale of Burma – the capital city’s population is 700k, so it is probably wrong to compare. Plus I have now acclimatised to the SE Asia way so there is less of a culture shock awaiting me in each new place.

Laos is also the most bombed country per capita, despite not having been directly involved in any of the relevant conflicts. In the capital, Vientiane, we went to visit COPE, an organisation that was originally created to support people with disabilities following accidents involving unexploded bombs following the Vietnam (or American, as they call it out here) War. I am sure we will visit equally harrowing places in Vietnam and Cambodia, but COPE struck a chord on the basis that Laos wasn’t involved in the conflict save for the fact it was the route between the two other countries, and therefore the place where the USA would drop their bombs when they hadn’t used them on Vietnam, but couldn’t land back at base with them on board. The statistics below are taken directly from the COPE website. For someone like me whose history is seriously lacking, it has really prompted me to take more of an interest. (And this isn’t USA bashing, incidentally, I don’t have remotely sufficient knowledge to make any judgment calls, and being British am sure I should be the last to throw stones. It was merely an extremely illuminating and moving exhibition). 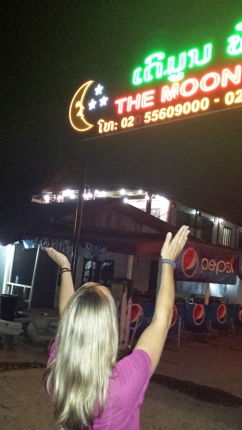 Time to look at the moon

Like I say, I existed in a bit of a fog during this trip so if the detail is vague, that’s because I wasn’t entirely with it. Thankfully whilst all my other senses failed me, I still had my sight and as you can see from the photos, this is a must see country. I loved it, loved my group, loved my irrepressibly enthusiastic leader Tudtu (I used a big word there Tudtu so you had to look it up, but it’s a compliment, I promise ☺), and miss them all already.

I am writing this from the bar of a very lovely hotel in Hanoi where I am taking a 48 hour luxury pitstop before my 3 week trip through Vietnam and Cambodia starts. Hanoi….. that is another story in itself. Next time.

I will finish with some stats of my own…. As I lay having my massage earlier (tough that), I worked out that in 9 weeks I have done 8 countries, 11 flights and 30 beds….. (3 of them comfortable). And I have loved every moment. I have also lost 9 lbs in weight – it gets better! Oh…. And I even had time to look at the moon (tenuously) See right…. 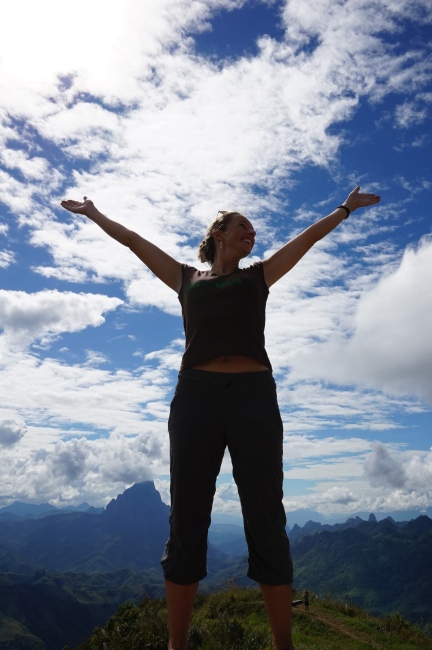