I am writing this whilst sitting in a hammock on the river, bathing in the sunlight having taken the elephants for a walk this morning. You don’t get to say that very often, do you? Note to self: remember the moment. I think it is fair to say that equilibrium is well and truly restored after the Cambodia misery.

After a relaxing few days by the beach in Phang Nha where I left you last time, I flew back to Bangkok and met up with some university friends who coincidentally had done the Cambodia trip the week after me and they finished up in Bangkok (as I would have done, had I not escaped to Singapore).

From there we did a daytrip to Kanchanaburi, which was as impressive as it was moving. We visited Hellfire Pass, the site of one of the most dangerous parts of the building of the Thailand to Burma railway during the Second World War. Over 60,000 Allied prisoners of war and 200,000 Asian labourers were involved in the construction of the railway with one in three estimated to have died during this period. 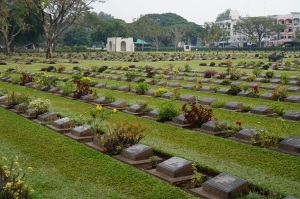 at the War Cemetery

Of those, 12,000 were PoWs and many are laid to rest in the beautifully maintained cemetery at Kanchanaburi, where we also spent some time. I had only recently watched the film “The Railway Man” on the recommendation of a friend and several parts were filmed both in Hellfire Pass and also on the railway line that we travelled along for a short period of time the same day. Once again, it was a reminder that there is so much history to take in and learn and I struggle to believe it when I read that they are contemplating taking the World Wars out of history syllabuses. 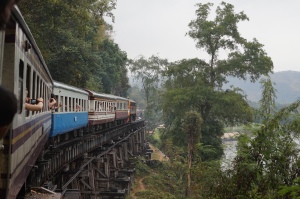 On the train on site of old Thailand to Burma line 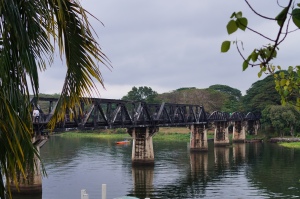 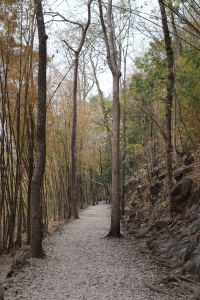 It was absolutely brilliant to spend time with old friends, doing some culture as well as playing “spot the sex tourist” (not difficult, but very amusing) each night we went out. My time there was topped off by a day hanging out in Chaturchak market, the biggest market in SE Asia, with John, a school friend who lives in Bangkok. I found Bangkok quite an intimidating city so it was great to pass the day in this way with him and his friends, just soaking up the atmosphere and watching the world go by (from our seats in the bar…).

From Bangkok I headed up to Chiang Mai in the North of Thailand and here began my return to nature. Unintentionally, although I am very happy it has worked out this way, my trip is divided history/nature, with Chiang Mai marking the start of the second part, so to speak. I did a brilliant cookery course in Chiang Mai city and then spent 3 days in Baanchang Elephant Park, an hour north of Chiang Mai, learning to care for elephants. Baanchang is a not for profit organisation that rescues domesticated elephants from activities such as logging and circus acts and provides a sanctuary for them. 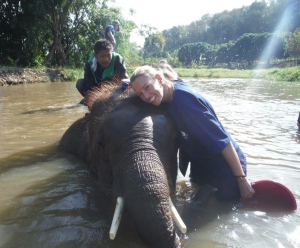 day 1 at the park 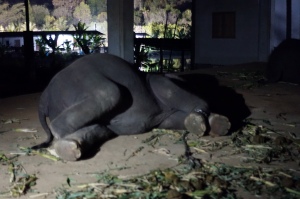 The highlight of the trip was staying overnight, seeing the sleeping (snoring!) elephants and then the second day, when just 3 of us remained to do a trek into the forest, where our elephants were left free to roam whilst we cooked our lunch over a camp fire. I also bathed the animals several times, which essentially involves wallowing in water filled with elephant poo and scrubbing hard whilst the keeper stands on the elephant surveying your work. So, whilst I will admit to the occasional bit of flashpacking, I would use the elephant poo in my defence to demonstrate that I am happy to get down and dirty as well! 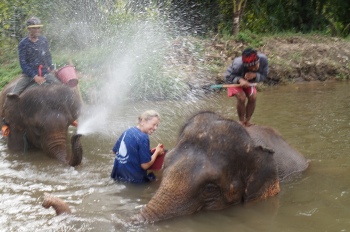 bathing with the elephants 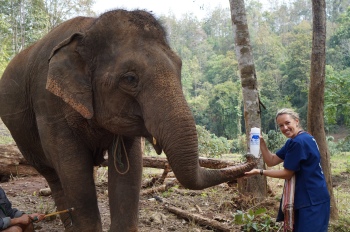 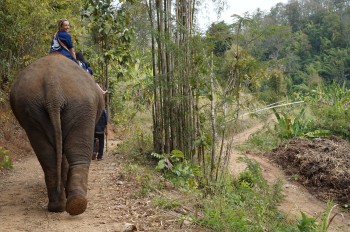 I stayed a second night at the park, this time on my own, when once again my overactive imagination convinced me that I was going to be attacked in the night. I wasn’t, but not before I had checked the windows and doors to my room several times and propped my daypack up against the door (which would clearly have held any attacker at bay for at least, oh, a second).

On the last day I did a trek up to a local waterfall. Flattered by the guide who told me I looked 29 and was very agile, I tried to live up to this by upping my pace and jumping over rocks, before promptly slipping and falling hard on my backside. Not remotely embarrassing. My back, already struggling from an overenthusiastic yoga session the previous week, now feels completely broken and if I stay in the same position for too long I end up having to push myself up like an old woman. I am not sure riding elephants helps, but strong co-cocodamol does (thank you Wendi for sharing your supplies) as does valium (thank you dodgy street seller in Laos). I am, for once, doing regular stretches to try and get it right as I have 9 days before I have to climb a mountain in Borneo and I will be gutted if I can’t do it.

Which brings me to the present day, and the last stop in my Indochina journey. I am now an hour south of Chiang Mai, staying in a beautiful eco lodge http://www.chailaiorchid.com, which is also situated on an elephant reserve. Until this point I had been a little disappointed by the lack of wow factor in the Chiang Mai scenery but here it takes your breathe away. We turned a corner and I did just that: “wow”.

picture doesn’t do justice to the scenery

Rice paddies in the foreground, beautiful mountains in the background. The lodge is situated in the mountains and one of the benefits of being a guest is that you can spend time with the elephants. Last night before I went to bed I asked about doing this and was told, very vaguely, to just be around at 7 am. So there I was at 7, and eventually a mahout appears and says “are you the elephant girl?”. Well, I guess so. And with that he fetched an elephant from the forest and told me to get on. With another couple from the lodge who had also appeared we rode through the forest for an hour with a baby elephant running around our heels like a naughty child, before walking them into the river and bathing them. It was so magical. 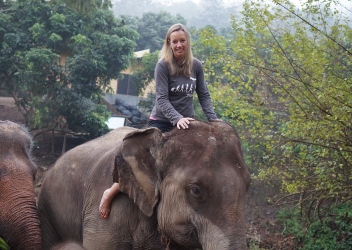 Riding at the Chai Lai Orchid 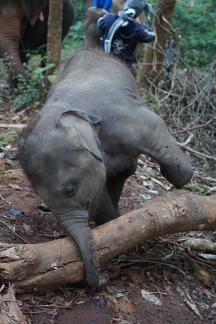 But it does make me laugh as I try and imagine this happening in the Western world, no instruction, no health and safety, no helmet, just “climb on” to this massive, untethered animal and off we go. Love it. And love the elephants – what majestic creatures. Here they seem genuinely happy, they have a river to roll around in and are regularly bathed and walked.

This morning I proved my cultural knowledge at breakfast when I identified a family who are staying here as Danish, based on the fact that I couldn’t understand a word they said, but that it did sound a lot like Borgen (brilliant Danish political drama to those of you who don’t know what I am talking about). And I was right. Sadly I identified this to them directly, it was a bit like the “I am carrying a watermelon” moment from Dirty Dancing when you stand there and think “did I really just say that out loud”?? Ah well, I will just tell them I am American…

I am here for 3 more nights before flying to Borneo to do my last group trip. All I can say is my group cannot possibly be worse than the previous one, so I feel like I have nothing to fear. It is sad though. The end of Indochina. I can’t believe the time has passed so quickly. So, it feels like time for a few more reflections on what I have learnt:

1. It is possible to carry anything on a motorbike. It is going to be strange to return home and not see entire families travelling together, or the contents of a garage, or, obviously, a cow.

2. “Face” matters a lot out here. A SE Asian person will nod and say yes, even if they haven’t a clue what you are talking about. This can be confusing.

3. A thai massage is a feat of endurance, not a relaxing experience.

4. You don’t need to be scared of eating dog in Vietnam. Dog is, in fact, a expensive delicacy and you are not going to be served it instead of beef. Cat is an even finer delicacy.

5. You don’t see many dogs or cats on the streets of Vietnam. See 4. 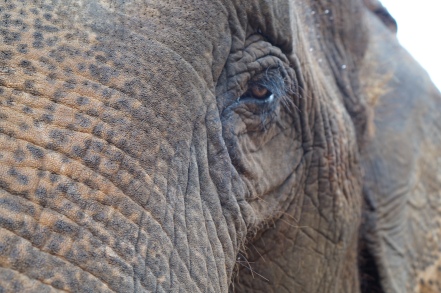 Who are you looking at?

6. Elephants are the best animal, ever. 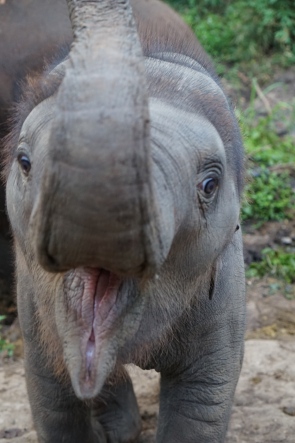 7. Elephants also do the best farts, which is quite disconcerting if you are sitting on one at the time. And they shit, a lot.

8. Losing track of what day or time is it is the best indication that you have finally relaxed.

9. Indochina is an amazing place with beautiful people. Yes, it has its dark sides, but so does everywhere. Other than when I have fallen victim to the excesses of my imagination (see above, and remember the pirates in Burma?) I have always felt totally safe, even though I have spent a fair amount of time travelling alone.

10. When I return home I am going to make an effort to be way more friendly to foreigners, as so many of my impressions of a country have been based on the people I have met and the kindness they have shown me.

11. I have amazing friends. I have learned that it is more lonely travelling in a group of people that you don’t bond with than it is travelling on your own. The latter is enriching and the times I have enjoyed the most have invariably been those when I have been master of my own schedule. I remain to be convinced by group travel although I think that has in the main been more a reflection on my independent character than the groups I have travelled with. But what has sustained me when I have been low are my friends back home and I thank each of you who has reached out (yes, I did just say reached out) with notes and calls. It has given me a new level of appreciation for friends and family.

I think so far:

And there is still so much to look forward to…. But I will definitely have a tear in my eye when the plane leaves the mainland on Tuesday.

I have to finish here. I am my mother’s daughter and the running water in the river is making me need to pee ☺ 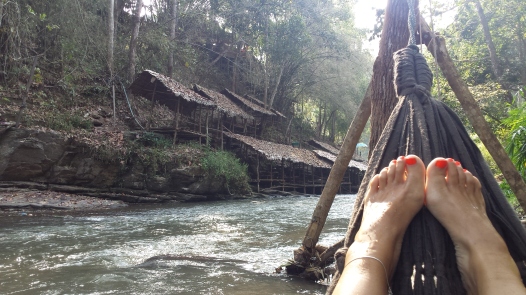 p.s. eco lodge in the mountain = bad wifi and I have given up trying to upload pictures as everything keeps crashing. Will update post with pics when I get a better connection.

← Time to Escape
Farewell to Indochina →